Well folks, once again I find myself stumbling upon a game that can actually assist the lives of many. Now I know that I’ve discussed the idea that gaming can actually help form a better world, and you know my deep appreciation for folks like Jane McGonigal. Well, the Institute for the Future has done it again. Today April 3rd they launched a game campaign called:

Catalysts for Change: A Game To Discover Paths out of Poverty.

Now I have my mixed feelings about social interaction games where it becomes a series of blog posts and social interactions between people. The sociological and psychological aspects of this though are so engrossing to me that I had to take a look. Essentially what you do is register to play the game, and then you can start playing cards which are viewable here. 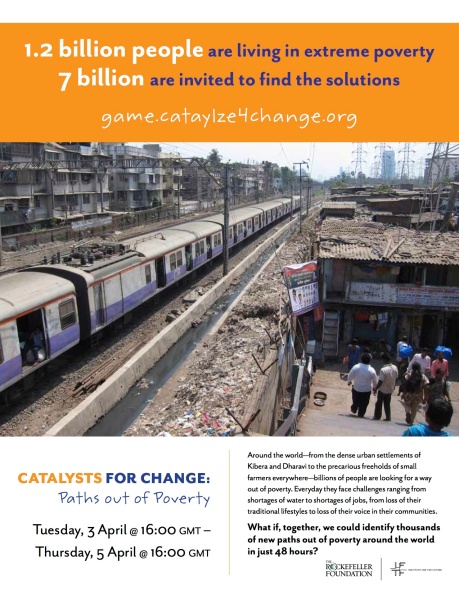 With so many people in poverty today - we should share our voices to solve it.

Here’s how it works:

You are given either Positive Imagination cards, or Critical Imagination cards. Positive cards describe positive ideas and paths out of poverty. Critical Imagination cards are cards that could lead to greater vulnerability. You can play as many or as few cards as you like but the point is to use these card points to begin engaging people. Once the ideas are spread perhaps they will want to join in on spreading similar ideas and thus the motion of the game progresses into this social brainstorming activity that will last for 48 hours.

Once you play a card there are other cards that others can play off of these idea cards. Momentum, Antagonism, Adaptation, and Investigation.

You earn points based on the amount of engagement you gain during discussions.

Momentum cards are whenever you pose a question that asks:

“How can we build off this idea? What would happen next?”

Antagonism cards are whenever you disagree with an idea and wish to address what’s wrong with it:

” This idea lacks… I think we should…”

Adaptation cards are when you agree with an idea, but choose to accommodate it to your particular region or grouping:

“I love your idea, but I feel that in my country we will probably have to…”

Investigation cards are any time you have questions about an idea and wish to find out more information to gain clarity towards the discussion.

“I appreciate your idea, but could you please explain…”

Now, what exactly are my feelings on all of this social gaming towards the benefit of solving poverty? I love the idea – because gaming is a social media aspect anyways. It promotes socialization and teamwork. We work better at problem solving when we’re grouped together, and honestly, solving poverty sounds like a better solution for our nation than solving a zombie horde in CoD: Black Ops.

My point is, that while I may not agree with the email/blog social interaction gameplay mechanic, I’m just not used to the mechanics of this type of game and I’m getting used to the concept. We need to find ways to allow people to make changes in this world, and not just in virtual ones. You know it astonishes me that people spend so much money on World of Warcraft gear [ REAL MONEY! Check Ebay! ] and yet we are dealing with a poverty-stricken world outside of the virtual one they inhabit.

Perhaps that’s why MMO’s were built? – to hide us away from the sad realization of our world existence. We want virtual worlds, where poverty isn’t even a word and where raiding for gold is as easy as a mouse click. Imagine though if we could devise a way to help poverty that was as easy as a mouse click? Would you join in on a game designed to aid poverty? World-wide poverty? If your ideas had the power to spread action into the lives of others would you do it? How? Would you build a game, or start a blog, or start a youth group of active innovators? The idea of Catalysts for Change is to get people playing a real-life MMO. No, not LARPing, but real people interacting with real people.

Games, if posed in this manner, can change the world. We can make a difference if we expose ideas and generate content that can benefit the world around us. You can check out and join the Catalysts for Change game and it starts as 4 pm GMT time and will run until 4 pm GMT on April 5th. Join the change and let’s see if we can’t make a difference for a better tomorrow!